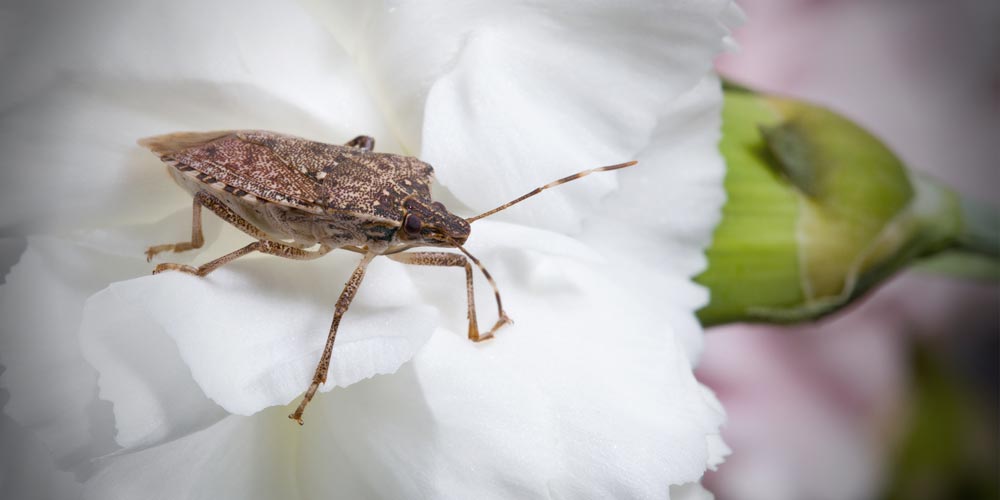 Over the past year, the brown marmorated stink bug (Halyomorpha halys) has become increasingly present in Canada. Originally from East Asia, this insect has kept gaining ground in urban areas and has caused significant damage to agricultural crops.

Why is it such a problem?

This insect was knicknamed "devil's thumbtack" as it has been responsible for the loss of numerous agricultural crops in the United States over the past 15 years or so.
Especially feared in orchards, it mainly attacks fruit trees such as apple trees, cherry trees, apricot trees, plum trees and peach trees. Brown marmorated stink bugs will also attack vegetables, corn, soy and vines.

The spread of the devil's thumbtack in Canada is mainly due to global warming. However, as it finds it hard to deal with our winter weather, it will look for a place to hibernate as soon as it gets a little cold. It often chooses garden sheds, basements, garages and even houses. Brown marmorated stink bugs particularly like cracks and windows, as well as kitchens and bed sheets. They move by train or other vehicles as free riders.

Adult brown marmorated stink bugs can reach up to 2.5 cm, that is, the size of a quarter. Being marmorated brown to reddish in colour, they have two white marks on their antennae and will release a foul odour when they feel threatened. The same foul smell will be released if you inadvertently squash one.

Even if brown marmorated stink bugs pose no threat to humans, they cause huge problems in the home due to their foul smell. They won't hesitate to invade your house by the thousands.

One of the reasons why it is hard to control the invasion is the absence of predators in the insect's country of origin. As it has no natural enemies, it is free to proliferate without fear of being preyed upon.

As for most insect infestations, prevention is the key. Here are our tips to prevent a brown marmorated stink bug infestation:

How to prevent bed bugs while on vacation
Getting ants out of the house in 3 simple steps
5 tips to keep your new home pest free
How to get rid of a wasp nest
All about fruit flies
Watch for the presence of those insects in your home this winter
Where do insects go in the winter?
How to prevent the presence of insects in your Christmas tree
Getting to know silverfish
The secret life of spiders