A predator of the Japanese beetle 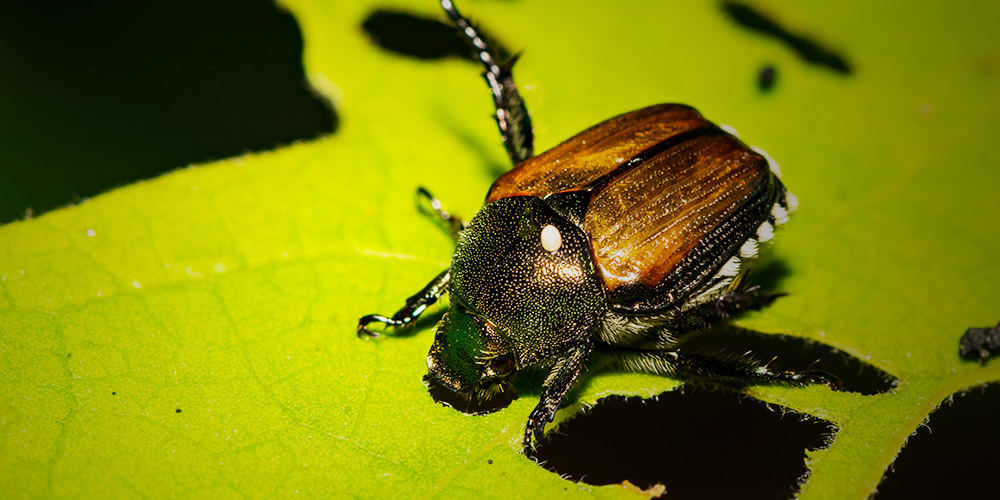 For several years now, Japanese beetles have given Canadian gardeners and farmers headaches. The first observation of this beetle species in North America dates back to 1916, and to 1939 in Canada.

This pest feeds on several tree species, vegetable plants, flowers and leaves. When it's finished feeding on a leave, only the veins remain. Japanese beetles cause significant damage to lawns at the larval stage, and to crops at the adult stage. They can be recognized by their brown and green metallic shell.

For decades, researchers have tried to introduce Japanese beetle predators to the country, but without success. Good news: tachinid flies (Istocheta aldrichi), a parasite helping to control the proliferation of the species, appeared a few years ago.

What impact do tachinid flies have?

This fly has a lifespan of a month, during which it will lay about a hundred eggs on young emerging beetles. The eggs can easily be recognized as white spots on the host's thorax, just behind the head.

An egg takes about 24 hours to hatch. Then, the larva penetrates the beetle and eats it from within, attacking the muscles required for flight. Eventually, this causes the beetle to fall; it will then hide in the soil and die within 5 to 6 days, without laying eggs. The larva remains in its host's body until the following spring, and a new cycle begins.

Unfortunately, tachinid flies aren't available commercially. You must wait until they naturally come to your region. They feed on nectar by gathering pollen like pollinators.  That's why it's very important to plant flowers they appreciate.

How to help control Japanese beetles?

When you observe Japanese beetles bearing eggs on their shell, avoid killing them so they can continue the process the following year. You should manually sort the normal beetles from those with parasites before trying to get rid of them. You will then contribute to controlling the Japanese beetle invasion.